Kugelhopf mould is originally made of enamelled terracotta, it gives its specific shape to the Kugelhopf, an Alsatian speciality.

Kugelhopf mould and the history of Kugelhopf

Kugelhopf is a yeast brioche originated in Alsace, Austria, the Czech Republic and Germany.
Its appearance is due to the very particular shape of its mould. Kugelhopf mould is tall, fluted on the sides and hollowed out in its centre. This mould existed already in 18th century.

Several legends surround the Savoy cake. After one of them, the origin of Kugelhopf lies in Bethlehem. One of the three wise men would have forgotten his turban when leaving the manger. This forgotten turban was set with almond-shaped diamonds.
After the Crusades, that same turban would have been brought to a pastry chef from Strasbourg who would have used it as a mould. The Alsatian word for turban is "Kugelhopf".

Another story would consider it as the "father" of Rum Baba. The King of Poland, tired of eating Kugelhopf, which he found dry, requested the cake to be drizzled with wine.

Kugelhopf mould has been around for many years. Made of enamelled terracotta, it is sometimes painted and can be used as decoration. Its original form is responsible for the taste to Kugelhopf. Terracotta Kugelhopf mould ensures a regular heat distribution, the outside is golden and the inside is soft.

MeilleurduChef.com carries Kugelhopf mould using materials with good heat diffusion and easy release.
Exopan® Kugelhopf mould, made of composite material created by Matfer provides even baking.
Exopan steel Kugelhopf mould is coated with a non-sticky layer. This mould combines the baking quality of tin with the simplicity of non-sticky surface.

Use several Kugelhopf mould trays from 6 to 35 cavities to bake mini Kugelhopfs. 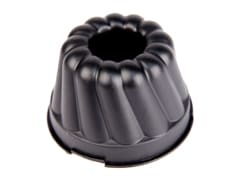 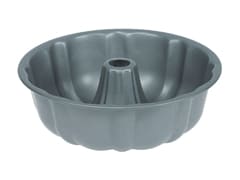 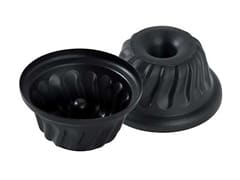 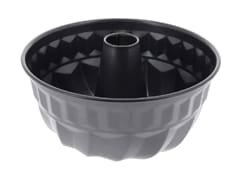 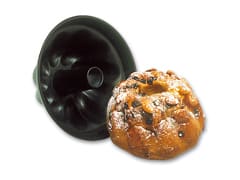